The month of Kartika is inundated with beautiful festivals which make this auspicious month even more endearing to devotees. November started with one of the sweetest festivals as we celebrated the appearance of Radha-kunda on 1st November. All of us gathered at the bank of Radha-kunda to hear the pastime of the appearance of the lake which is so dear to Srimati Radharani. We all sang the Radha-kunda astaka, offered ghee lamps… while the small Deities of Radha-Syama accepted the worship of the devotees while seated on Their throne situated in the middle of the lake.

A few days later, on the day of Dipavali we celebrated Lord Ramacandra’s return to Ayodhya. Devotees lit countless candles in the temple and at their houses, so the whole of Krishna Valley shone brightly in a festive light. Sita-Rama-Laksman-and Hanuman rode around the streets of Krishna Valley on an ox-cart, surrounded by the devotees whilst holding kirtana. They even visited some families’ homes to accept the manifestation of their heartfelt love in the form of food offerings and aratis.

Next day being Thursday was the day of Govardhana-puja and although we held the grand festival 3 days later on Saturday, we still cooked for Govardhana Lal all day on Thursday as well. Actually the devotees had already been cooking for two weeks continuously beforehand so that there would be lots of sweet and salty preparations, for the pleasure of Giriraja in the big Annakuta offering on the festival day. All members of the New Vraja Dhama community too enthusiastically joined in the making of preparations from the small children up to the most elderly of New Vraja Dhama vasis.

Not only the locals, but devotees all over the country are busy preparing foodstuffs for Govardhana-puja, a week before the festival so that they can also bring lots of preparations for Giriraja! This year we offered 1920 kgs of food, and just over a ton of this was made here in Krishna Valley, the rest were the loving offerings made by devotees from other parts of the country. Govardhana Lal had a really broad beaming smile as He sat on His huge cake whilst eating other offered preparations, He seemed really pleased and happy with it all! We offered Him abhishek too and a big part of the program was held at the goshala, where we worshipped Radha-Syama’s cows and oxen. A few days before the festival the Goshala was nicely cleaned and decorated for the cowherd devotees to make a beautiful altar for Govardhana Lal where they baked lots of chapatis for the cows. We also held an arati for Giridhari at our local Govardhana Hill, circumambulating Him there too with an enthusiastic kirtana. 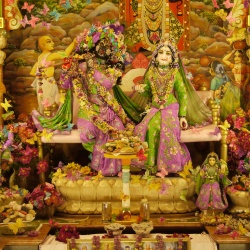 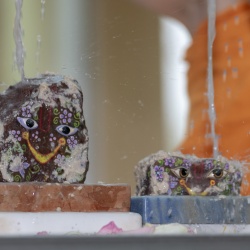 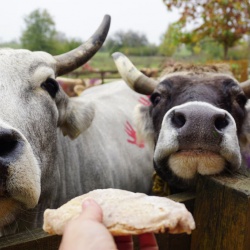 The festival was successful Nitya-seva wise also, since – similar to the previous festivals – many devotees came forward with donations for the pleasure of Their Lordships. We have three new sponsors this month: two new families started sponsoring Nitya-sevas in installments and one other family paid in a second sponsorship in one payment. Another family started to raise their previous payment to the new amount! We would like thank you all for your services, you can be rest assured that Radha-Syama and Gaura-Nitai are showering Their blessings upon you! There are also two other new sponsors whom we’d like to mention here. Although they have never visited Krishna Valley before, only just followed the Nitya-seva page of Radha-Syama on Facebook, they became so mesmerized by Their beauty, that they were inspired to participate in Their seva by sending donations. Jaya Radha-Syama!

And the festive season didn’t end with the Govardhana-puja festival! We honoured the disappearance day of Srila Prabhupada the next day, by remembering the extraordinary character and achievements of our founder acharya, and at the time of his departure we offered kirtana and arati in his honour with all of the devotees offering ghee-lamps to him in gratitude.

Gopastami is also very much liked by the devotees, since this is the only time of the year when we can see Srimati Radharani in the turban and gopa-outfit! We again had a wonderful darshan this year too, so when we heard the wonderful katha of Srimati Radharani leaving Javat dressed as a cowherd boy to meet Her Syama, we could almost see it with our mind’s eye… 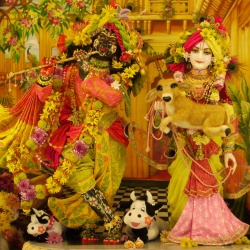 But finally let’s get back to realm of Nitya-seva for a minute and have a look at November’s free days in the calendar! You can choose from the following dates for your sponsorships: