Our last newsletter back in April contained within it a wish. A wish that one day soon we could all come together again and chant and dance for the pleasure of Radha-Syama. As COVID restrictions are gradually lifted, that reality is seeming more and more likely. And by Radha-Syama’s mercy it was partially fulfilled when we came together to celebrate Nrisimha Caturdasi and Srila Sivarama Swami Maharaja’s Vyasa-puja at the end of May, by which time Hungarian law allowed larger gatherings. It meant all devotees from the various corners of the Hungarian Yatra could be physically present together before Radha-Syama. After 1.5 years, it was an exceptionally enlivening experience for all. We tried to facilitate the participation of the international community by broadcasting the festivities, and continue to hope and pray that everyone can be physically present very soon.

As usual, Krishna Valley has been a busy hive of activities in the past months. In April we celebrated Rama Navami, the appearance day of Lord Ramacandra. And although we had a rather chilly spring, Gopesvara Mahadeva and Yogamaya Devi returned to their summer dwellings at the front of the temple, on Rama Navami day. Devotees have the opportunity to bathe Lord Siva on Mondays with the help of a pujari who conducts his weekly abhisheka, and thus satisfy the greatest of Vaisnavas. Furthermore, Tulasi Devi spent the winter in the main corridor of the temple, but now all the tulasis have moved back to their greenhouse. We are very grateful to the devotees of the Pécs (a town in Hungary) Nama-hatta, who came together to install the insulation in Tulasi Devi’s greenhouse; they put up a green net inside to protect Tulasi Devi from the scorching heat of the summer sun.

As mentioned above, Sri Nrisimha Caturdasi and Srila Sivarama Swami’s Vyasa-puja celebrations took place in May. This year both occasions were celebrated over a single day rather than the usual two. Devotees came from all over Hungary, and both the temple room as well as the nearby tent were packed full of devotees. Festivities abound, with classes, kirtanas, abhisheka and a wonderful prasadam feast. Sri-Sri Radha-Syama received new morning and evening outfits both on the festival day as well as the day after. 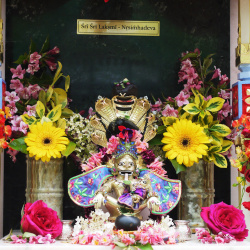 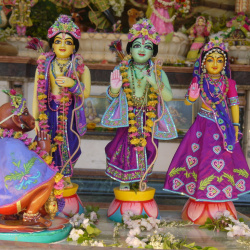 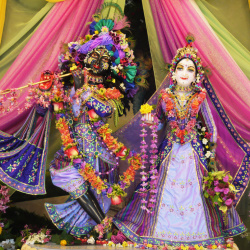 In our continued efforts for greater and greater degrees of self-sufficiency, the flower garden is full of wonderful blossoming flowers, so all the Deities’ garlands as well as the decorations on the altar are prepared using local flowers. The vegetable garden offers a vast variety of produce. And we are also working on having Deity outfits for Radha-Syama and Gaura-Nitai in Budapest to be produced locally, with various talented devotees from around Hungary involved; from manufacturing the raw materials to designing, cutting, sewing, and decorating the outfits.

As always, we would like to share the story of one of our donors. István Korbély met one of our sankirtana devotees around 6 years ago. He was very open to Krishna consciousness and gave a generous donation in exchange for some books, and later on contacted his Hare Krishna friend to find out more. Since then, he has become a regular donor.

But the story does not end there. Not only did István decide to donate privately, but being the owner of the “Euro Family” business chain, he had his company add our community to their list of beneficiaries. The “Euro Family” (also known as the “Eco Family”) Hungarian chain of businesses promotes environmentally-friendly and sustainable products. This means they sell healthy foodstuffs, and no meat at all! In their shops, customers find messages such as “love,” “gratitude,” and “humility,” instead of the normal advertisements that promote increased consumption and sensual enjoyment. István also sells various books of a spiritual nature, and so he has made sure that Srila Prabhupada’s books are on the shelves too. Many people have found their way to Srila Prabhupada and Krsna consciousness through István’s bookshelves in the past few years.

István began to contribute towards the Nitya-seva project in 2018. He generously committed to sponsoring two days at that time, and this year in June pledged a further two days. In characteristic magnanimous fashion, he asked that the blessings for his service be conveyed to the entirety of mankind rather than just to him and his family. It was touching.

Who knows how many other such wonderful souls are out there, waiting to connect with the devotees and with eternal service to Radha-Syama. We are doubtless that by serving Their Lordships with ever-increasing love and devotion, They will arrange, by Their inconceivable potencies, for such individuals to come to Their lotus feet.

On a final note, we would like to sincerely thank you all for your continued support, service and donations for the pleasure of Sri Sri Radha-Syamasundara and Sri Sri Dayal-Nitai Vijaya-Gauranga. Your devotion keeps Them here and encourages Them to give Their protection and mercy to the local devotees as well as to devotees worldwide.