Covid-19 seems to be casting a shadow over everyone’s lives, often dictating where we go, what we do, and who we meet. For us here in New Vraja Dhama, September started with a scare after one of the Budapest congregational members tested positive for the virus. In order to stop its spread and possibly infiltrate the safe haven that is New Vraja Dhama, we partially closed the gates for a week. After confirming there were no infections on the farm, the gates reopened but with additional precautionary measures.

But that’s not all. Covid’s influence has even reached this monthly newsletter! With fewer events on the farm, new and exciting stories to share with you all are also harder to come by, and we have been concerned about becoming a little repetitive. We planned to provide our donors with exclusive updates about the farm, Radha-Syama and related topics, and thus keep in touch. After 5 years though, we see that only one-third of the Nitya-seva donors have subscribed to the newsletter, and not all of them actually open and read it. Therefore, we feel that the newsletter is not really serving its purpose. However, since those who do read it continuously tell us how much they love it, we have decided not to discontinue it, but to reduce its frequency from monthly to trimonthly. We hope that in the upcoming newsletters we will be able to provide you all with some interesting and enlivening material. Please stay tuned!

The following donor story is about a celebrity who became a devotee and now a Nitya-seva donor! Gigi became quite a famous figure in Hungary after her participation in a Hungarian reality show. But it was when she met the devotees on the streets during a Harinama at one of Budapest’s busiest squares that she first got attracted to Krishna consciousness. She joined in with the jovial atmosphere and loved it so much that she made it a point to participate in the Harinama every day after her yoga class. Soon she found a flyer about the Bhaktivedanta College BA degree for Vaisnava Yoga Instructors (a state-accredited degree offered by our college) and enrolled on the three-year course. During her studies she became a practising devotee.

Years after her participation in the reality show the media still follows her life and she uses it to good effect, showcasing her newly adopted spiritual path. Her Vedic wedding was broadcast on one of Hungary’s largest TV channels and she openly speaks about being a Hare Krishna devotee to the media. She is also one of our Nitya-seva donors and plans to complete her entire Nitya-seva donation in two years. We see that through our enthusiastic preaching efforts, Lord Caitanya’s mercy is being spread far and wide, and by the mercy of Gaura, all are brought to the lotus feet of Radha-Syama. 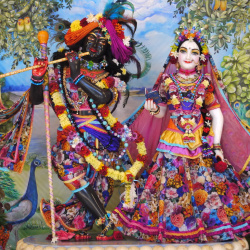