In Krishna Valley, July means the Bucsu festival. It is one of the main events of the year, usually bringing in over 8,000 visitors to take darsana of Radha-Syama, participate in a multitude of activities, shows, and talks, and of course honour untold varieties of prasadam. This year, unusually, preparations began just a month before the actual event, since the Bucsu had been all but cancelled, until a last minute U-turn led the organisation team to leap into action. Despite the rush however, the event was just as professional and seamless as always.

Naturally the virus affected the attendance this year. But about 5,000 enthusiastic guests braved the potential dangers and visited during this three-day festival. So the guesthouses were full, the festival tents and stalls were flooded with crowds of interested guests and the restaurants were trying to keep up with orders. Overall, the Bucsu was a great success!

In times like this, where the lifestyle we know and have come to rely upon is being fundamentally challenged, people start searching more seriously for an alternative. God and spirituality is a natural direction, and so Krishna Valley, being such a well-known and respected spiritual centre in Hungary (and in parts of Europe) becomes even more of an attraction. Thus we were happy to have the opportunity to open the path of Krishna consciousness to all those who came to visit during the Bucsu festival. 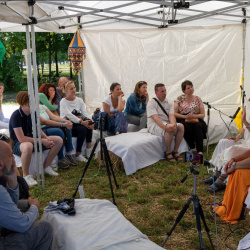 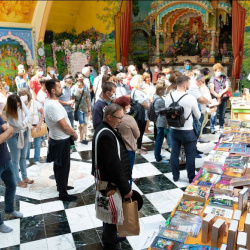 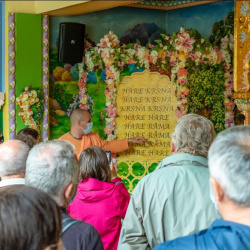 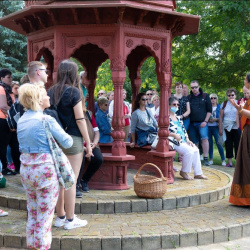 One of our guests at the Bucsu was Gyöngyi. Gyöngyi’s relationship with the devotees deepened last October when she approached a book distributor in Budapest. By that time she had already read Srila Prabhupada’s Bhagavad-gita, as well as 7 cantos of the Srimad Bhagavatam, and was awestruck and grateful for the knowledge she had received from these two epics. She has been a vegetarian since her childhood and had always cultivated a very close and personal relationship with God. But reading Srila Prabhupada’s books provided her with a real depth to her spirituality, because “God” now had a name, a form, an abode with many friends, and multifarious pastimes. By the mercy of His Divine Grace, the concept of a “personal God” took on a whole new meaning in her life.

Wanting to show her immense gratitude for the books that helped her intensify her relationship with God, she desired to give a donation towards the dissemination of Srila Prabhupada’s message. With that purpose in mind, she approached the book distributor, and after exchanging contact details she visited the temple, met the devotees, and quickly became a regular. During the Bucsu festival she even had the good fortune of meeting Srila Sivarama Swami and receiving further inspiration in her spiritual life.

In her heart, Gyöngyi always had the desire to personally feed and dress the Lord. Realising that by donating towards the Nitya-seva project she would be contributing towards these very activities, for eternity, she became inspired to take part. Having already given a generous donation towards book distribution, she also decided to sponsor a Nitya-seva day, and is now one of our new donors.

Indeed there were 9 new donors in July, 8 of whom made their pledges on the very same day. Thank you to all of you who have given towards the maintenance of Radha-Syama. 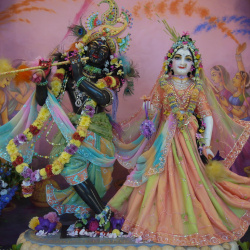