September has come and gone, taking with it the last warm days of the year. During the first two weeks many guests passed through and multiple volunteers stayed with us from the end of summer through the middle of September. But as the summer gave way to fall there were only one or two helpers who remained, working hard in our vegetable garden, restaurant, goshala and canning facility.

As Radhastami approached, many guests arrived anticipating the ecstatic weekend to come. And this year’s festival was not disappointing. We were happy to welcome B.B Govinda Swami and Chandra mauli Swami.  There were also other senior Prabhupada disciples. The festival was highlighted by long, ecstatic kirtans, enriching classes and breathtaking darshans.  When it ended, everyone agreed that the weekend ended way too soon. 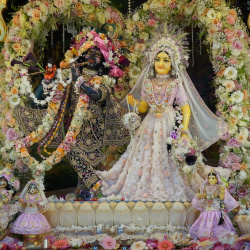 September brought an exceptional number of guests as well as an exceptional amount of new Nitya-seva donors. On top of the 7 pledges which we received during Radhastami, we gratefully welcomed 4 new donors, and, in addition, 2 families decided to start donating towards their second Nitya-seva pledge!

It is always enlivening to hear about the unique way that our donors become inspired to begin their sponsorship.  Each donor has a special story behind their decision to start their Nitya-seva journey. These stories help to remind us how personal and loving Sri Sri Radha-Syama truly are.

One couple from Budapest has been practicing Krishna consciousness for about two years now. They come to the Budapest temple on a regular basis and gradually the depth of their spiritual practices has increased.  A few months ago, Mohana Dasa started sending them daily darshan pictures of Sri Sri Radha Syamasundara to their phones via, WhatsApp. This allowed them to have some personal contact with the divine couple every day. Recently, in a response to one of the pictures, the lady wrote Mohana Dasa and explained to him that in her job as a beautician she decided to put aside some money from what she received from her clients everyday and offer it as a donation for Radha-Syama. Eventually she came to the point where she could commit to a Nitya-seva sponsorship and she indicated that she would like to begin. After discussing this with her husband, he revealed that he too was desiring to donate toward a Nitya-seva pledge, and so they were both excited to start sponsoring a day to last until eternity. By merely seeing images of Radha-Syama daily this couple’s connection with Them became so strong that they both felt inspired from the heart to establish an eternal connection with Them. Radha-Syama never neglects anyone who shows even the smallest inclination towards Them.