During the second weekend of July, each year, Krishna Valley hosts the famous, three day long, Bucsu Festival. Participants visit the temple, enjoy entertainment on the main stage, buy food and other products from a variety of vendors and enthusiastically hear and watch various lectures and demonstrations. All are invited and generally about 8,000 guests attend.  This year some guests who saw Sivarama Swami’s online vlogs traveled from far away to Krishna Valley just to meet him in person.

We were also happy to see one couple, who first met the devotees a few years ago at a harinama and participated in two consecutive Budapest Ratha Yatra festivals, make it to Krishna Valley for the first time.  Although Judith professes to be an atheist, she comes throughout the year, and at the Bucsu festival dedicatedly volunteers at our goshala outdoor kitchen. This year she appeared on Friday, just as the “gates” for the festival opened, with a few cutting knives in hand. She remembered that last year when she was there helping, all the knives were dull, so she bought new ones to make the job easier.

The gurukula was transformed into a “playhouse”. Inside, parents accompanied their children to different activity areas and, interacting with the devotee volunteers, enjoyed themselves at various arts and crafts. One father who was sitting with his daughter making a doll out of banana husks was so absorbed in the work at hand that it put a smile on those witnessing this sweet exchange. At the kitchen tent, just outside the gurukula, one family enjoyed their breakfast so much that they decided to come back to the same spot for lunch and dinner as well.

During Bucsu, we get many volunteers who are not necessarily practicing devotees but who have simply heard about the event and wanted to offer their assistance. One such volunteer was Krisztina. Bucsu, was her first time in Krishna-Valley and her first encounter with Krishna consciousness. She liked the festival and the devotees so much that she decided she would like to continue to volunteer by working from home. Now she is engaged in helping to translate from Hungarian to English and we look forward to her continued help. 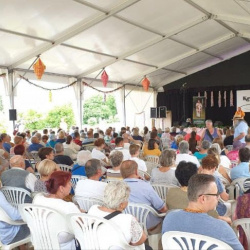 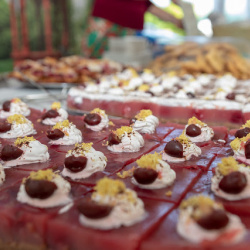 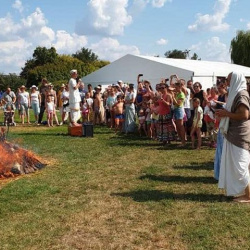 This month we had two new donors, both from abroad. One was from Kenya and the other from the UK. In June and July both visited Krishna-Valley for the first time. They were so enchanted by Sri Sri Radha-Syamasundara that they have each committed to sponsor a Nitya-seva.

Sivarama Swami’s online preaching attracts much attention. In June, a group of 12 people came to participate in a retreat with Maharaja. A mother and son from Kenya, who were members of the group, and initiated devotees, were mesmerized by the spiritual potency of Krishna-Valley especially the beauty of Radha-Syama and the kindness of the devotees. They were inspired to support the project by donating in installments towards a Nitya-seva.

One evening, after a kirtan with Sivarama Swami, the mother expressed her appreciation of Krishna Valley.  She said she saw this transcendental place as non different from Vrindavan and appreciated how the mood in both places seemed the same. She noted how all the devotees looked like residents of Vaikuntha, dressed in dhotis and saris, singing and dancing in kirtan and lovingly serving the beautiful Deities of Radha-Shyam made her feel like she was in Goloka Vrindavan.  Her son promised that when they got back home, they would spread the news about Krishna Valley to friends and family and try to get others to support the project. 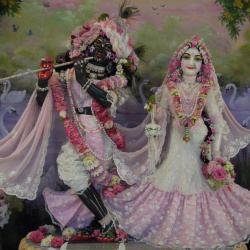