This year on the day of Vasanta Pancami – which marks the beginning of spring in India – New Vraja-dhama was, as in the past few years covered with snow. Only the altar was in a spring mood: Radha-Syama wore a beautiful yellow outfit as per the tradition, and all the decoration (the materials, the flowers…) everything was yellow including some of the food offerings where possible.

A few days later we celebrated the appearance day of Lord Nityananda:  Nityananda-katha and constant chanting went on in the temple room and the devotees became so enthusiastic, that the kirtana continued on into a harinama in the neighbouring village. Meanwhile the pujaris were busy making special preparations, with an offering and arati every hour for the pleasure of Lord Nityananda. The Deity of Nitai was made here by the local artists, and like all our other festival Deities, He is also very beautiful. This year He received a new outfit for the celebration as well as Radhe-Syama who had a new evening outfit too on this occasion. 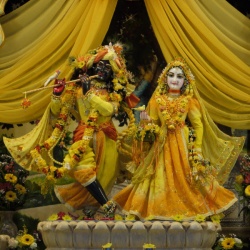 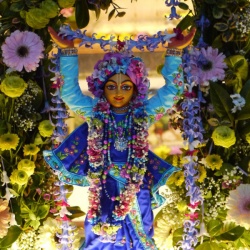 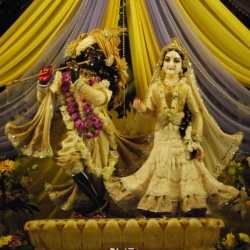 As we are speaking about birthdays, a few days ago one of the Nitya-seva donor ladies phoned us: they wanted to arrange a special gift for the birthday of one of the senior matajis, who is very dear in the hearts of all the devotees in their community. After contemplating for a while about what they could give her so she would remember it all her life, they finally decided to pay a full day of Nitya-seva in her name. So that the mataji wouldn’t know of the surprise beforehand, we kept the secret for a few days, before thanking them after they had presented their gift:  the eternal mercy coming from the support of the worship of Radha-Syama. What could be more of a special gift than this?

Others were also eager to get this eternal mercy this month: two devotees started to increase their Nitya-seva payments to the present amount and many of you joined in with smaller donations. Thank you so much for all of your contributions! Last year the amount of the Nitya-seva donations received from devotees increased eight times compared to previous years, and this year we would like to increase it even more by the grace of Radha-Syama and all of you…

In March the following dates are still available for Nitya-seva sponsorship:

First week of March: only 3rd is taken!

Third week of March: 14th, plus all days between 16th and 19th are free