This year we celebrated Lord Balarama’s appearance day with a parikrama in New Vraja Dhama.  The devotees accompanied Lord Balarama, who was traveling on an ox-cart, to the various places of His pastimes, where they glorified Him with bhajanas, and spoke about the lilas He performed there.  In the meantime, food preparations were being made from local produce to be cooked outside.  Digging into the ground we made earth stoves nearby for the pleasure of Lord Baladeva, and this time not only altar-clean brahmins, but all enthusiastic devotees could participate in the cooking.  After the last food-offering the program finished with puspanjali, where colourful flower petals were offered to Sriman Balarama. 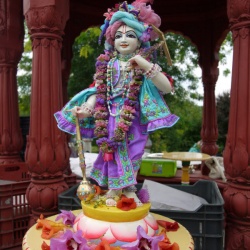 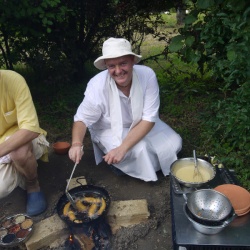 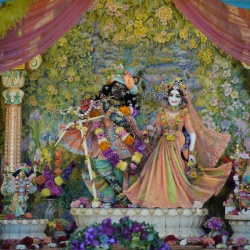 On 25th August we celebrated the twentieth anniversary of the installation of Radha-Syama.  On this special occasion we offered a flower-outfit for the pleasure of Their Lordships, which was made the previous day and night by the devotees.  Not only the New Vraja-dhama vasis, but the guest devotees also participated in making the remarkable outfit, the flower jewellery and the flower crowns – so it was the combined effort of so many loving servants for the pleasure of Radha-Syama and Their associates, Lalita, Viaskha and Madhumangala, who also served the Divine Couple on the altar on  Janmastami day.  We had wonderful kirtanas and katha all day long glorifying Radha-Syama, Who participated in special pastimes that day:  They were swinging, boating, we offered an abhisheka ceremony to Them, and They received food-offerings every hour throughout the day.  On this auspicious day two new donors committed themselves towards Radha-Syama’s Nitya-seva too!

The next day we wanted to organize a nice festival for the pleasure of Srila Prabhupada on his appearance day.  Showing our gratitude to him for taking up the Lord’s order in setting out to the West to spread Krishna-consciousness all over the world.  His new vyasasana was finished a few days before the festival, so he could preside on it the day before Janmastami.  On his Vyasa-puja day his disciples spoke about his pastimes and their association with him.  Which was simultaneously very sweet and very intense, since Srila Prabhupada often expected serious surrender from devotees.  But when they took their spiritual masters orders to heart and did their best to serve him, even impossible things became possible by his mercy. 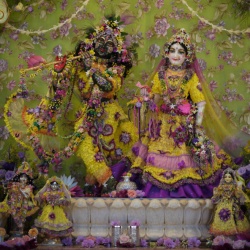 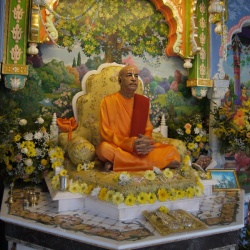 There was no rest for us either after the festivals, as small Radha-Syama got an invitation to another Nitya-seva program.  This time They participated at a garden party in Budapest at the home of one of the donors.  Devotees received Radha-Syama with great devotion and they offered a nicely organized, extraordinary program:  they sang bhajans glorifying Them, read from the Krishna-book, had bharat-natyam dances for Their pleasure, and cooked more than a ten course feast for Them. Radha-Syama’s pastimes are unlimited and as more devotees take part in Their service, Their lilas can be shared more widely and more diversely.  We would like to thank all of you for contributing towards this, with your donations and your services, and please encourage many more people to be involved in the service of Their Lordships!